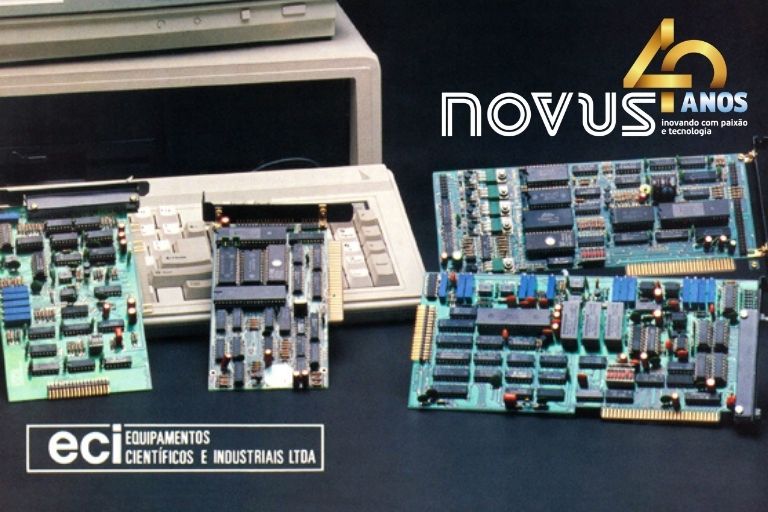 Customers, partners, employees and even suppliers are already familiar with the ethics, technology, and quality of NOVUS products. But few know some curious details about the company that celebrating it’s 40th anniversary in 2022.
To begin this journey into NOVUS’ history, we have listed five curious facts:

1. NOVUS has moved its headquarters 5 times

NOVUS’ first headquarters resembled some big tech company’s place of birth: a garage. The space held some of the equipment needed for the production of electronic instruments with little clearance. When the first three employees and partners were present, it was necessary to take turns on who would stay in the room the company was in.

Soon NOVUS moved to the second floor of a residence next to the first headquarters, where it remained for some years. The third address already had a more structured production line and spaces with dividers for the different sectors of the company.
After more than 10 years at the third address, NOVUS moved to Álvaro Chaves Street, in Porto Alegre. Finally, in 2018, it began its activities in its own headquarters. The building was specially designed and built to house its operation and is located in the Canoas Innovation Park.

When it was founded by two professors, the company was called E.C.I: Equipamentos Científicos e Industriais (Industrial and Cientific Equipment). Besides being long as a full name, the short version used to be wrongly pronounced as “E-SSÍ”.
The name NOVUS was slowly introduced after almost ten years as E.C.I . When choosing, it was a concern that the new name should be easy to pronounce in different languages, since the electronics produced in Porto Alegre were gaining more and more space in the international market.

3. The first customer to buy parts in large quantities was Springer-Carrier

A team of engineers from the former Springer-Carrier, now Midea, met NOVUS in its first years of operations and saw the potential for the electronics manufacturer to supply a specific demand to produce air conditioners.
Thus, Springer was the first customer to buy, on a monthly basis, more than three hundred parts manufactured by NOVUS.

4. The first part to go to market was a temperature controller

A long-term commercial partner, Irmãos Sanchis was the first furnace manufacturer to offer its machinery with NOVUS temperature controllers installed. This partnership goes back to the beginning of its history as E.C.I. and this manufacturer’s furnaces still use our controllers exclusively.

5. 40 years after the first controller, NOVUS is launching a complete innovation in this segment

Temperature controllers were part of NOVUS’ foundation and have enabled the company to sustain and grow over the past four decades. For the last decade, the team of engineers and developers has been working on a completely innovative control device never seen in the electronics market before.
Innovation is in NOVUS foundation and the company continues to rely on its technology to remain relevant in the market. The new controller brings an unprecedented concept and to find out more details just register to follow the launch live.

Data logging in sanitation: How to have greater control and avoid excessive losses